The World at Dinner, University of Bologna (UNIBO), Italy

Aiming to overcome prejudices and build contact, dialogue and communication between the Italian society and migrant population, UNIBO’s Peace Envoys designed their project around the bonding power of sharing food. They have adopted an opponent stance against the demonizing and stereotyping view of migrants increasingly depicted by politicians and media. They wanted to create a bond between the different communities of migrants and locals in Cesena, the city where some departments of the University of Bologna are located, and make available spaces where people could have positive contact experiences and encouragement to meet and talk about the phenomenon of migration, personal experiences, perceptions and challenges.
The idea of socialization through the sharing of food comes from the social value of food. Food no longer becomes just food but an experience of conviviality, of sharing customs and traditions that can lead to the discovery of new flavours, while at the same time revealing unexpected similarities. This theoretical starting point has taken the form of dinners, an event in which the migrant community and the “native” community of Cesena find themselves cooking and sharing recipes and stories belonging to their own culture. The dinners have been musically accompanied with the support of UniRadio Cesena (the local University campus radio), which developed a playlist sensitive to the different musical traditions of those present. After each dinner, the recipes, accompanied by the stories of those who shared them, are collected and uploaded to the project website, gradually creating a “culinary and human” recipe book, which is constantly updated.
In order to find a channel to reach out to the civil society organizations that work on migration-related issues and organize these dinners on a city-wide scale, they approached and built partnerships with several key organizations that will last even beyond the lifespan of the Peacemakers project. Among those organizations are CGIL Cesena, an Italian workers’ union, through them Comunità Accogliente, a network of associations that work for a more welcoming environment for the migrants providing services and support to migrants who have difficulties in working and living in Cesena, the Municipality of Cesena via the VALUES project, which is an EU project for sharing good practices and policies of integration between cities. 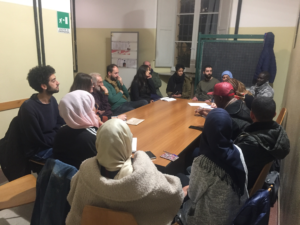 With the support of those organizations, the Peace Envoys organized first a meeting to which almost all of the migrants’ association active on the city of Cesena were invited to and shared their project idea with them. This meeting was attended to by representatives of the Municipality, Comunità Accogliente, the VALUES project representatives, and several associations of migrants from Benin, Senegal, Cameroon, Cote d’Ivoire, Poland and Morocco. This meeting was also the first time in years in which all the migrants’ association would meet up together with the Municipality institution and have a common project to work on.
The first “The World at Dinner” activity was organized with the participation of one hundred people composed of migrants and Italians invited and brought to the event by several different NGOs, as the first one of a series and the first step of a long-term collaboration for new inclusion projects between the Peacemakers student club and the migrants’ associations.